During the first three quarters of 2017, Toyota was Japan’s best-selling carmaker, the Prius the top-selling model and the Honda N-Box the favorite mini car. January to September 2017: Toyota easily maintained its traditional position as Japan’s largest vehicle manufacturer followed by Honda and Suzuki. Japanese new vehicle registrations increased by 7.5% to just over 4 million vehicles sold during the first three quarters of 2017. The Toyota Prius was again the best-selling car model in Japan despite a sharp drop in sales. The most popular mini car thus far in 2017 in Japan was the Honda N-Box.

The top-selling vehicle manufacturers (including cars, buses and trucks) in Japan during the first nine months of 2017 according to JADA were:

Top Carmakers in Japan in 2017 (January to September)

The Japanese new car market expanded for the 11th consecutive month in September 2017 with all of the top ten largest manufacturers increasing sales thus far in 2017.

Toyota and Honda remained the two largest carmakers in Japan during the first three quarters of 2017 but both lost market share with sales increases below market average.

Mazda sales were relatively flat while Subaru increased sales by nearly a fifth and Mitsubishi sales increased by 12%. Isuzu sales were up by 4.5%.

Truck maker Hino increased sales by 9% to push Mercedes-Benz out of the top-ten list. Mercedes-Benz slipped to 11th with relatively flat sales but sufficient to easily remained the largest foreign car brand in Japan. BMW and VW had similarly unremarkable increases in sales in Japan thus far in 2017.

Lexus was the worst performing car brand in Japan thus far in 2017 with sales down by nearly a quarter. Lexus slipped from 12th place last year to 15th behind VW and BMW.

Volvo was the only larger foreign car brand in Japan to outperform the broader market thus far in 2017.

The ten best-selling car models in Japan during the six months April to September 2017 according to JADA were:

During the six-month period April to September 2017, the Toyota Prius remained the best-selling car model in Japan. However, sales of Japan’s favorite car were down by 40% following very strong sales during the corresponding period in 2016.

The Nissan Note moved up from 8th a year ago to second most-popular car model in Japan with sales up by more than two thirds from a year ago.

The Toyota Aqua slipped from second a year ago to third with sales down by nearly a quarter. The Toyota C-HR, a new model, entered the list at fourth.

The new Honda Freed model saw sales triple and a new entrant on the top-ten list at fifth. The aging Honda Fit slipped from fourth with sales down by 8%.

The Toyota Vitz increased sales by a fifth with an improvement in rank position from tenth a year ago. In contrast, Toyota Sienta sales were down by a third and the model slipped from third a year ago to 8th. The Toyota Voxy slipped from fifth to ninth.

The Nissan Serena re-entered the top-ten list with sales up by more than a third. The evergreen Toyota Corolla slipped to 13th.

The top ten best-selling mini cars (kei-jidousya) in Japan during the first three quarters of 2017 according to Zenkeijikyo were: 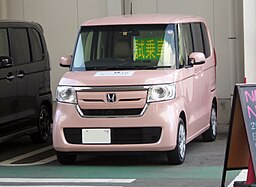 Mini cars (kei-jidousya) in Japan are vehicles defined by amongst others being shorter than 3.4 m with a maximum height of 2 m and a maximum width of 1.48 m. The engine capacity is restricted to 0.66 l measured by the Japanese standard.